The Impact of No Fans in Stadiums

On March 7th, 2020 North End lost 3-1 to QPR leaving us going home disappointed after a second-half implosion. Not a significant or extraordinary game but it did turn out to be the last time Deepdale had fans present.

Unfortunately, it seems as though any chance of us returning anytime soon is slim. This has meant that what should have been a temporary measure, to play out the remainder of the 19/20 season behind closed doors, has now become a more permanent fixture. This new dimension paired with a very hectic schedule (owing to the mid-September start) has had a far-reaching impact not only in the Championship but leagues around the world.

Read Jimmy’s piece for LancsLive about our squad depth and the impact that the hectic schedule, almost a game every 4 days prior to 2021, could have on Alex Neil and his squad.

This piece is to investigate how it has impacted North End and to try and give a bit of insight into the manager/players views on this topic.

This section will mainly be a comparison to the last three seasons under Alex Neil. Obviously his first two seasons (and third which was about four-fifths complete with fans!) against the current season without us.

*Anomaly Norwich (a) played as a pilot game with 1,000 home fans in attendance.

There is such a stark contrast between our home and away form this season. Here are the current Championship home and away tables (via soccerstats.com).

There is no getting away from the fact we have failed to register a single point at Deepdale and we’ve also, rather concerningly, only managed to score one goal. Can this be put down partly due to the lack of fans?

In the last three seasons on average we pick up 9.33 wins at home and 7.66 wins away. Under Alex Neil there does tend to be a slight variation between home and away form season on season. For example, 19/20 we were better at home (remember the club using the ‘Fortress Deepdale’ marketing spin for the half ST campaign?) but not as good on the road – whereas in his first season it was flipped the other way around.

For this I thought that the simplest way to showcase it would be to use pie charts on our home and away W/D/L % in the previous three seasons (because who doesn’t love a good pie chart?!). 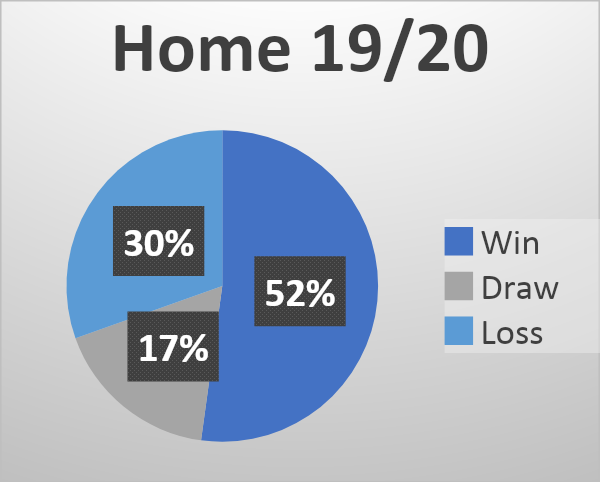 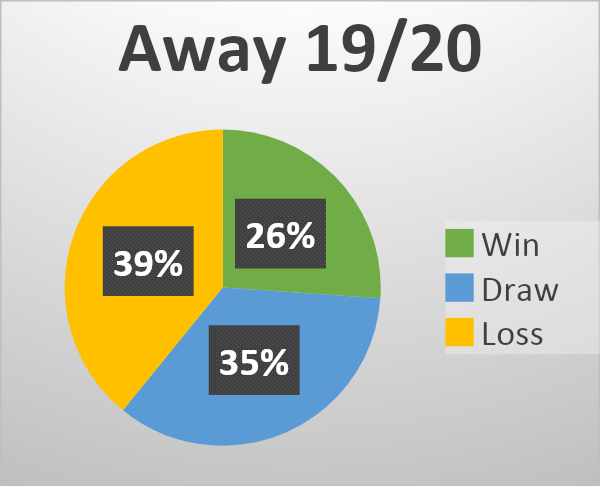 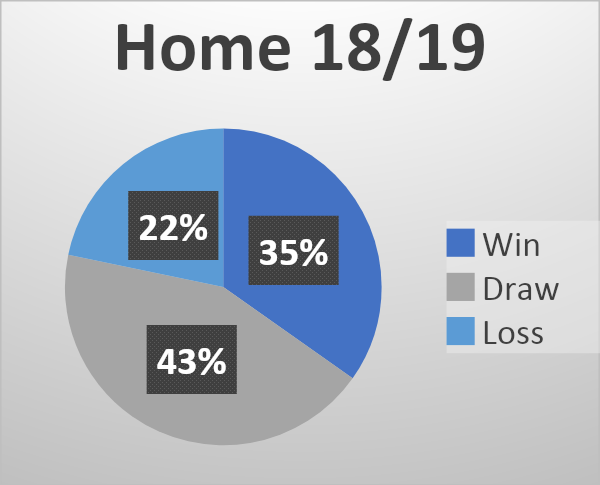 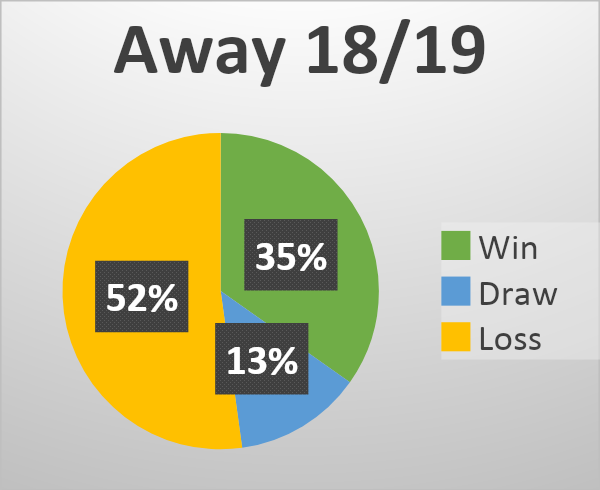 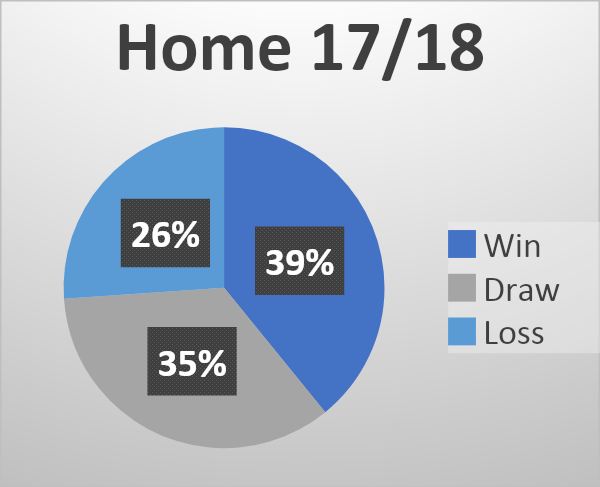 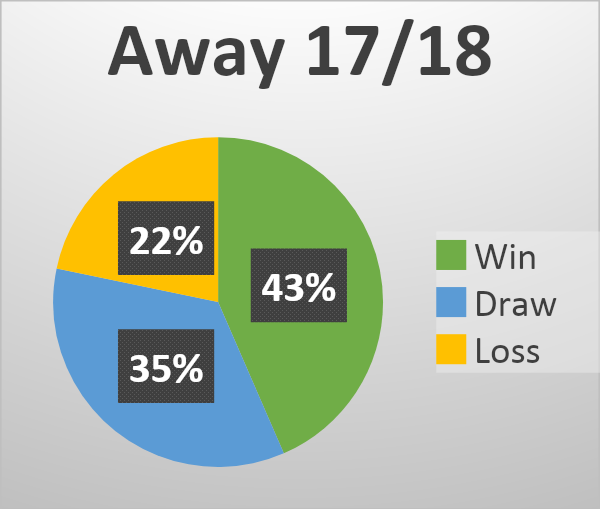 Then the lockdown games. This is a mix of the end of the 19/20 season and this season excluding friendlies and cup games. 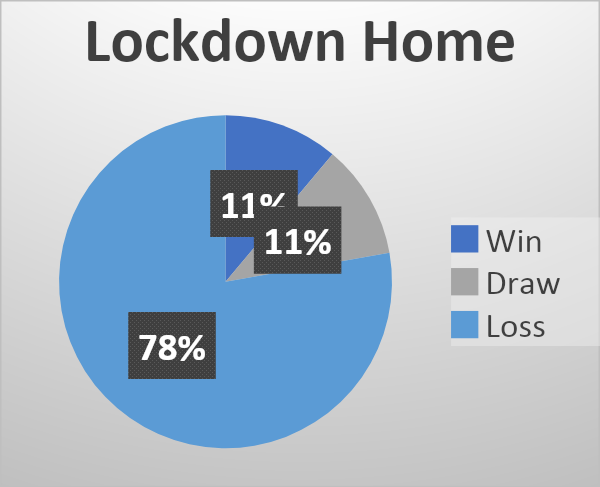 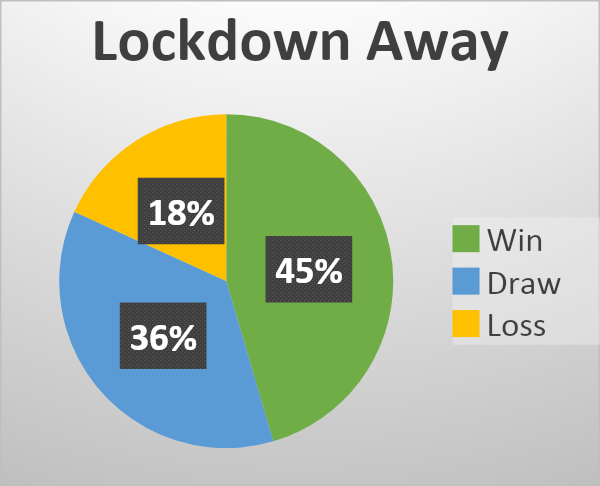 The big takeaway from this is the difference in home form. 19/20 petered out disappointingly and we have started off this season poorly compared to ‘Fortress Deepdale’ last season with fans.

This isn’t a problem that North End are facing alone with no team currently having any kind of home advantage per se. The table below from soccerstats shows relative home/away performance.

It shows that ten other teams are performing better away from home and Reading currently not performing better home or away. We do have the biggest difference though and that 0.00 PPG at home isn’t great to look at.

Obviously, we’re only 11 league games into the season but the concern is that games are continuing to come in thick and fast. Will we have the squad depth to cope with this and be able to turn around this miserable run at home?

Another interesting and frustrating aspect of games behind closed doors is the officiating. There can be no doubt the lack of fans there to get on the refs backs when a questionable decision is made has altered the picture. The main comments in the media around this are that player discipline has improved as there is less talking back and also less ‘pressure’ on officials in a sense, though equally, you could say managers will still get onto the fourth official if they feel injustice.

In terms of trends, looking at the Championship the last three seasons before the lockdown (including 19/20 where the season finished behind closed doors) – stats from transfermrkt.

From this, I calculated the average number of cards as 1,852.7 yellow cards, 74.3 red cards. Then working off this to calculate an 11-game average (for purpose of comparison to the current season): 443 yellows. 17.8 red cards.

So far this season, based on the above trending slightly below in terms of yellows (if I’ve worked out the numbers correctly, apologies if I’ve made any errors):

It’s important to note this is analysis is based on averages and taking into account the last three seasons. This could certainly change over the course of the season as players adjust and become more accustomed to playing without the fans.

The immediate one that comes to mind for North End was Barky’s sending off vs. Stoke – which I maintain was never ever a red card. This has been our only red card during the lockdown games along with 23 yellows (incl. end of 19/20).

A lot was made of the Premier League not having a goalless draw this season until that was broken by West Brom and Burnley (anyone surprised it was those two?) in the 47th game on 19th October, but what about the Championship?

I love how open and unpredictable the Championship can be which was always the case pre-lockdown too. This season has seen 286 goals so far with 19 games containing 4 or more goals.

Currently, 17 sides have scored over 10 goals in the opening 11 games. North End as mentioned, have scored 15 averaging 1.36 with Scott Sinclair being the top scorer with 5 goals. North End are doing well being up in 6th despite only scoring one at home. The table below is from sportsmole.

The signing of Emil Riis was one that excited fans and after his early performances, he looks like the player we have been missing for so long. I think we just need to have a little patience and remember he’ll still be settling and getting used to our style of play.

Fans are not alone in missing live football. Both managers and players are having to deal with games greatly lacking in atmosphere and impetus. Reporters have noted games feeling quite flat and a bit surreal to watch and no doubt that feeling is the same for all those involved on matchday.

I gathered a few comments from our current crop to try and get an insight into how they’re finding the situation (for reference most of the quotes were from before the second lockdown was announced/implemented):

“Having no fans does take away from the match, it is bizarre. It has been really eerie in the grounds; I’ve been in football most of my life and it is really strange not to have a crowd.”

Paul Gallagher speaking after signing his new contract in August, via pnefc:

Darnell Fisher ahead of the Cardiff City game, June 2020, via pnefc:

“It was weird playing behind closed doors. It felt more like a pre-season or a bounce game that you play at the training ground, but you know there is something at stake and in the back of your head you know it is a Championship game and there is something on it. I like a crowd, as you know I get a bit of stick up and down the country, but I enjoy that and it is going to be a bit different when I don’t get a bit of stick. It is what it is though.”

Darnell Fisher speaking the LEP after the draw at Norwich City earlier in the season:

“There were no Preston fans, but I celebrated over in front of the Norwich fans because they were giving me stick. We’ve had no fans in the ground for about six months, they come back, and I get stick!”

Frankie McAvoy speaking to Lancs Live after the defeat to Brighton in the Carabao Cup:

“Some teams and players need a lift from the fans, don’t they? They do make a difference to us here at Preston and when we had our chances at the end of the first half, the fans give you that lift, and they galvanise you. They push you on and I know people say that players should be able to do that anyway, but the fans are a massive part of football.”

? boris man…but fans can’t go to a game of footy outside ? https://t.co/8QLNdNGiYt

Emil Riis speaking to Lancs Live after the victory against Reading:

“I don’t really check social media, but I have had a nice few messages from the fans… From what I hear they (the fans) have been great in welcoming me as well, so I enjoy that.”

If only you knew how much you are loved already, Emil.

It is an unprecedented situation we are living through which is everchanging and you can only hope we’ll be back in stadiums soon because no matter what anyone in Government says, it’s simply not the same without us there.

Just a quick nod towards the #letfansin campaign you may have seen on social media which has received the backing of the Premier League, EFL, The FA, Women’s Super League, Women’s Championship and of course, clubs up and down the football pyramid.

It’s vital that we, as football fans, keep the pressure up on the Government to allow fans back into grounds safely as soon as possible. If you haven’t signed the petition to “Allow football fans to attend matches at all levels” yet, you can find it here.

Hand on heart I can honestly say I will never take going on Deepdale on a cold, rainy Tuesday night for granted ever again.